Building a large scale system is not one time effort, it should be an iterative process as the user workload increases. The journey could just start with single server and single user request. 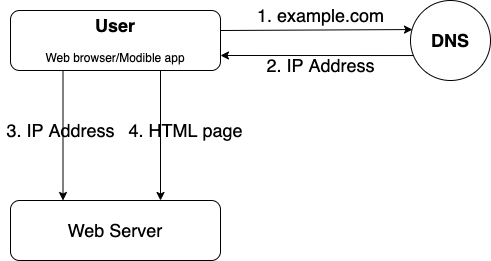 With the growth of the user base, we can separate the web server and database server to allow them scale independently. 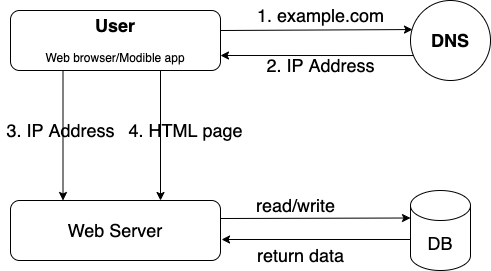 Non-relational database is also called NoSQL database. The popular ones are MongoDB, CouchDB, Cassandra, HBase, Neo4j, Amazon DynamoDB and so on. They can be grouped into four categories: key-value stores, graph stores, column stores, and document stores. Generally, join operations are not supported in non-relational database.

Vertical scaling, also called "scale up", means adding more compute power(CPU/Memory), disk bandwidth, and network bandwidth to the servers. Vertical scaling is simple but it's impossible to add unlimited resource to a single server. It doesn't provide failover and redundancy and it may cause single point of failure.

With the single server setup, users won't be able to access the website if the web server goes offline. Users may experience slow response(high latency) or failed connection if there are too many user requests to the server simultaneously. 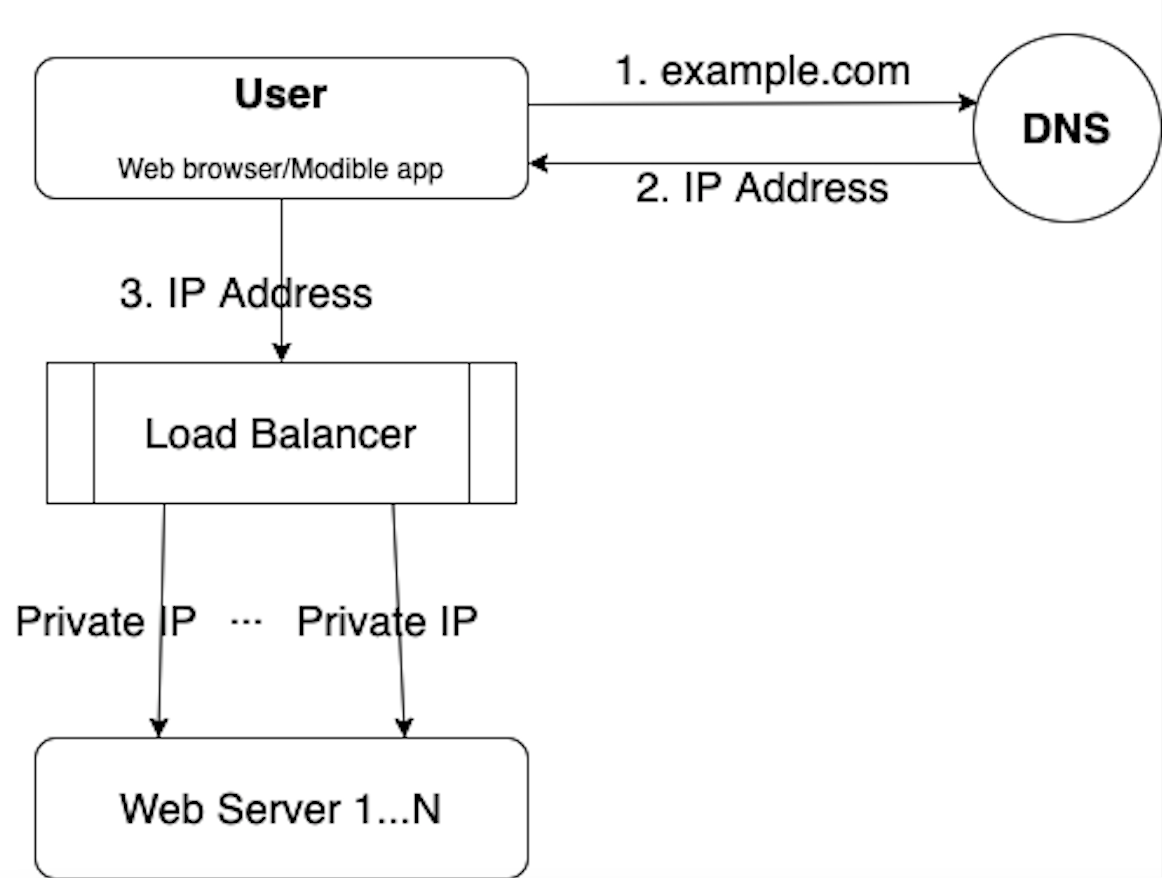 After the load balancer and more web servers are added, we improved the high availability of the web servers. For example, if web server 1 goes offline, the traffic can be routed to other web servers which are still healthy. As the website traffic grows rapidly, we can always add more web servers to scale and handle the incoming traffic.

Now that we can scale the web tier as needed, how about the data tier? Database replication is a common technique to address the problems like failover and redundancy.

"Database replication can be used on many database management systems (DBMS), usually with a primary/replica relationship between the original and the copies." Source

A master database generally supports write operations only. A slave database replicates data from master and only supports read operations. 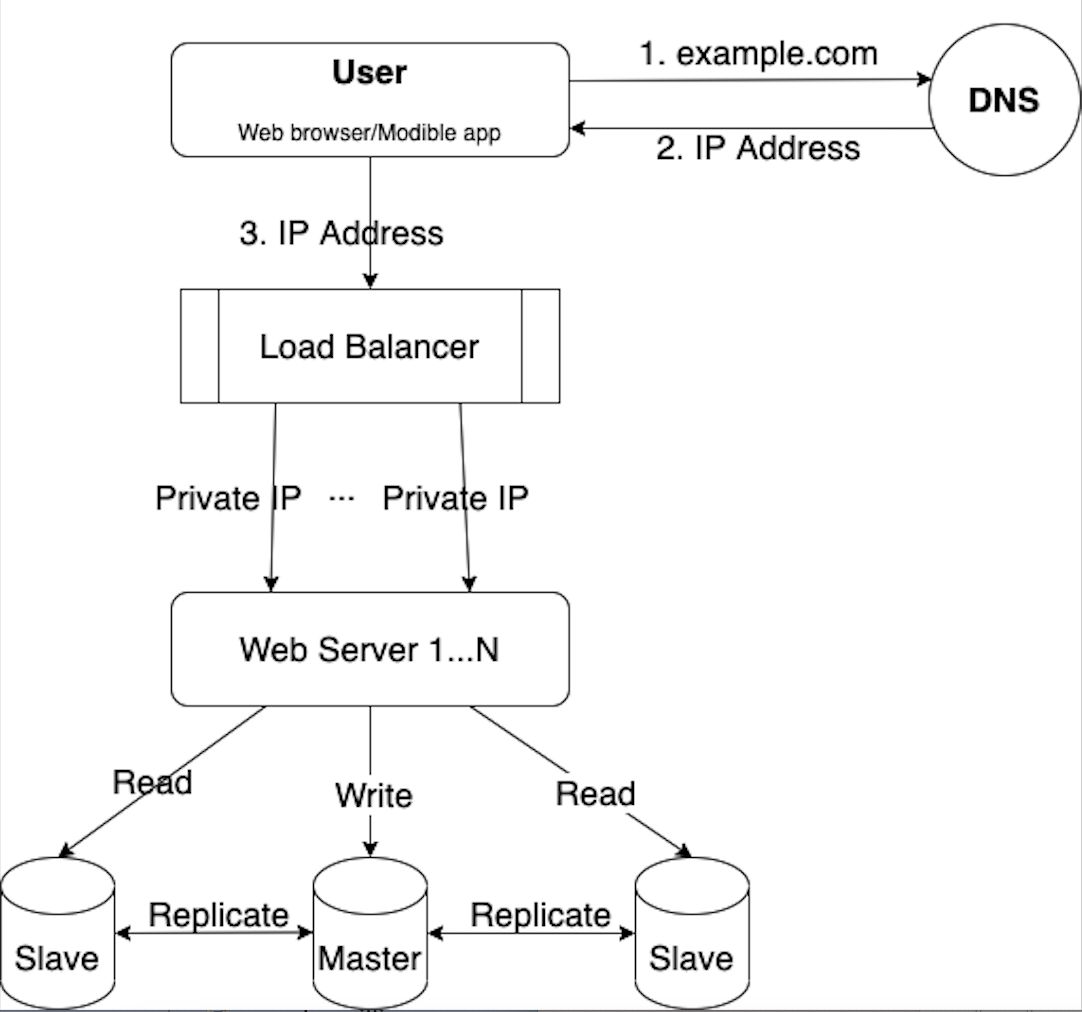 The master-slave model may not be the only method. We just use this model to learn about how to scale the database tier. We can achieve much better performance by spearating the write and read operations to master and slave databases. It also provides the data reliability in the case of natural disaster like earthquake. The data is highly available even if a database is offline.

After we have the design of scalable web and data tier, it's time to improve the system performance like response time. Adding a cache layer can help serve the user requests more quickly. 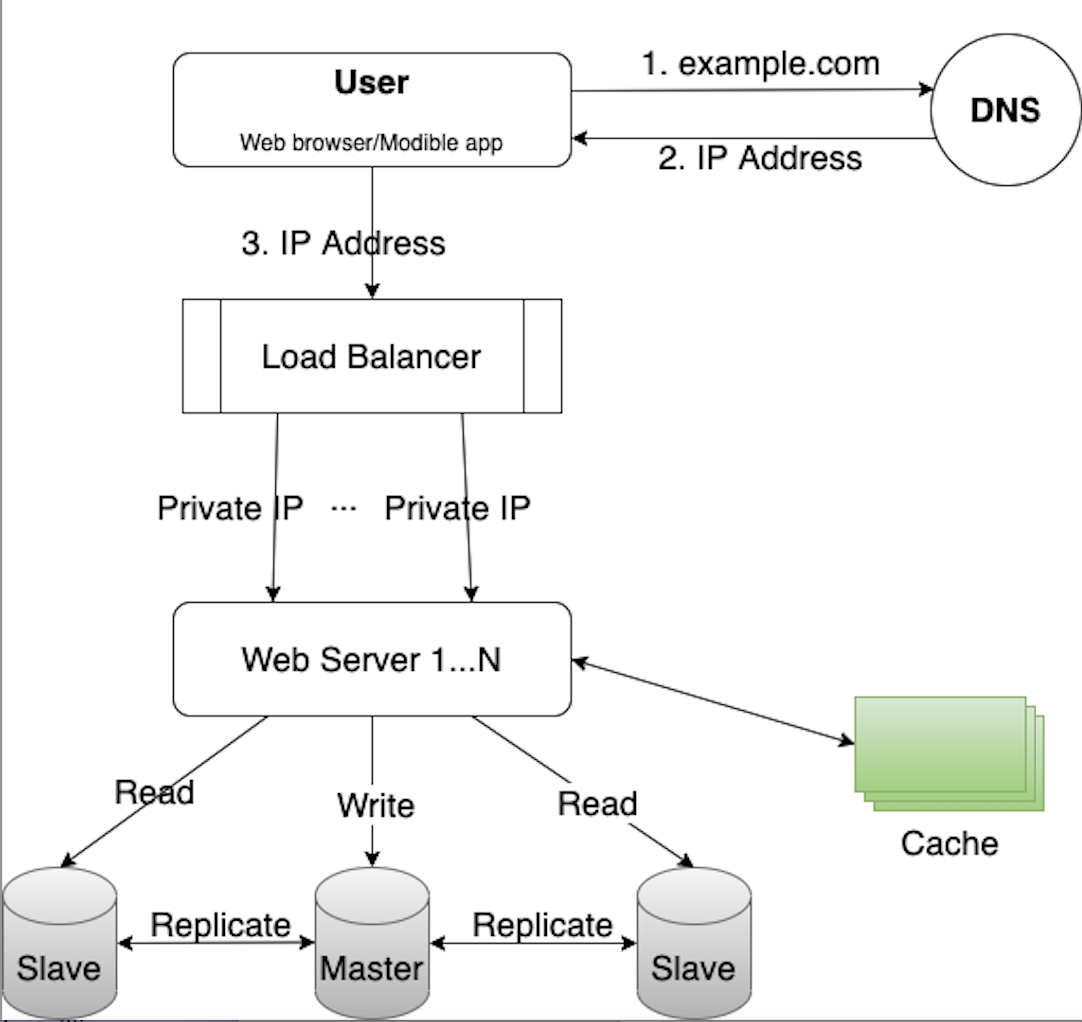 Here are some considerations for using a cache system:

When a user visits a website, a CDN server closest to the user will deliver the static content. The website loads faster from a closer CDN server. 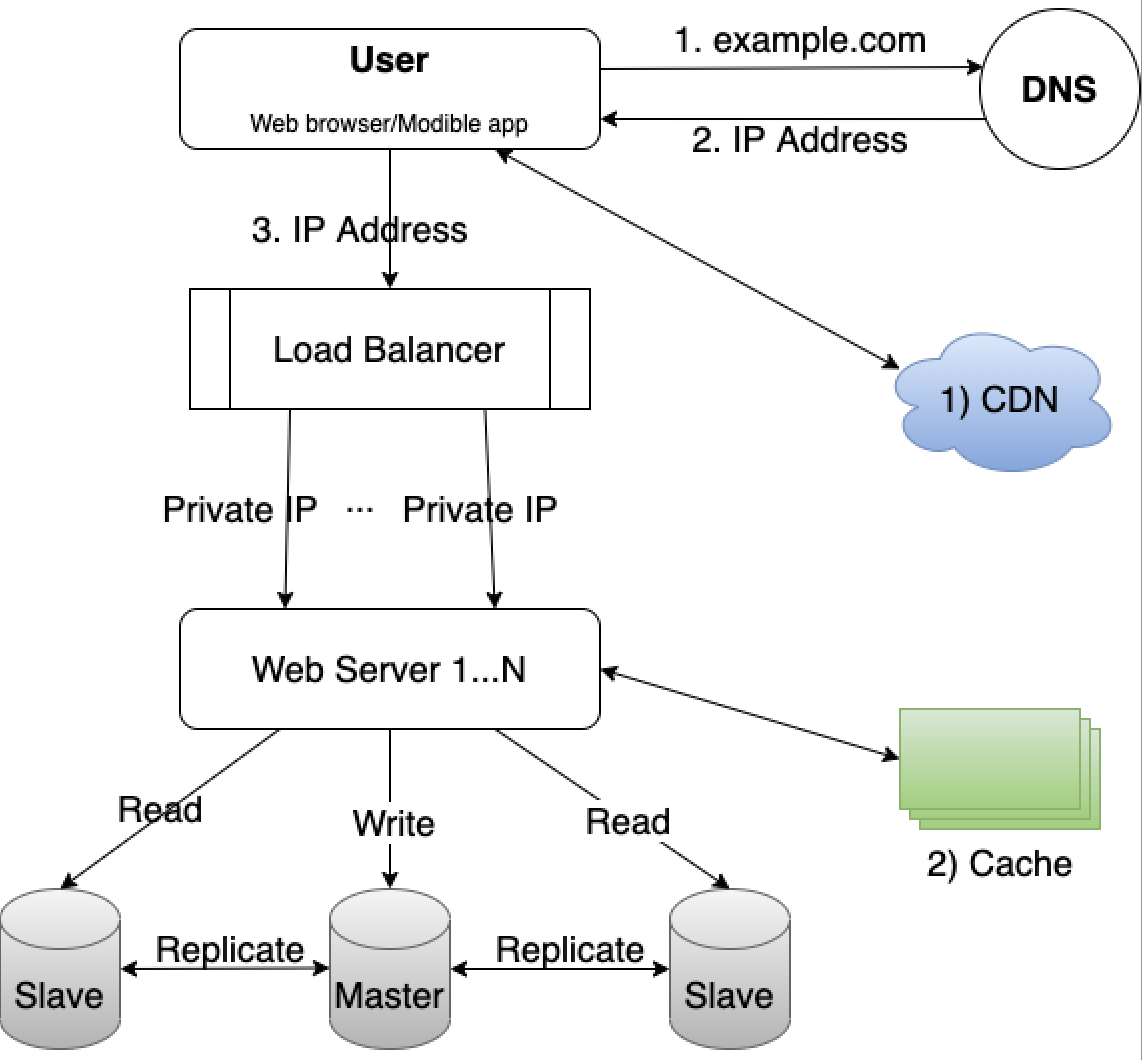 In order to scale the web tier horizontally, we need to move the state(e.g. user session data) out of the web tier. A practice is to store the session data in the persistent storage such as SQL or NoSQL database. The web servers in the cluster can access the state data from the database. This is called stateless web tier.

In the stateless architecture, the HTTP requests from many users can be sent to any web servers. The session data will be fetched from a shared data store which is separated from web servers. 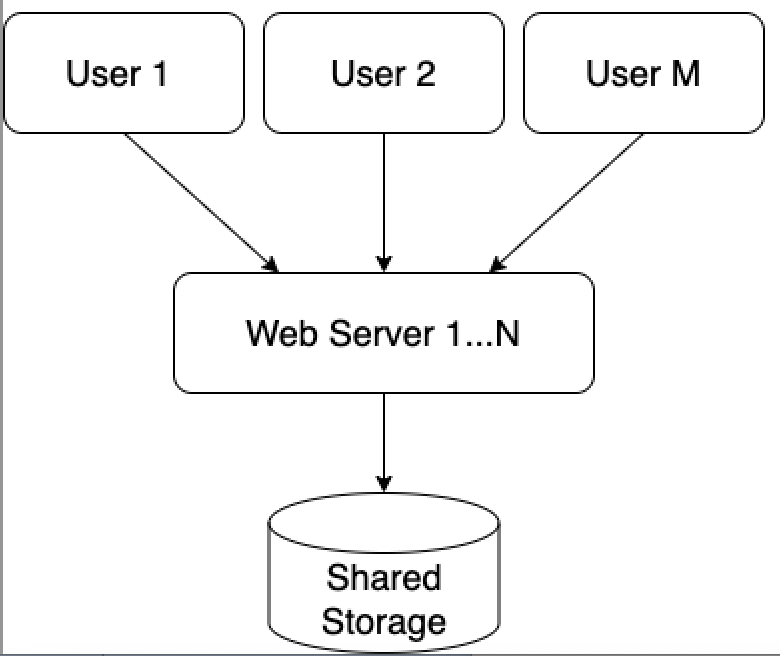 After the session data is stored out of web servers, auto-scaling of the web tier becomes a lot more easier.

As the website access grows internationally, supporting multiple data centers globally is crucial. In the event of any data center outage, the traffic can be directed to a healthy data center as well. 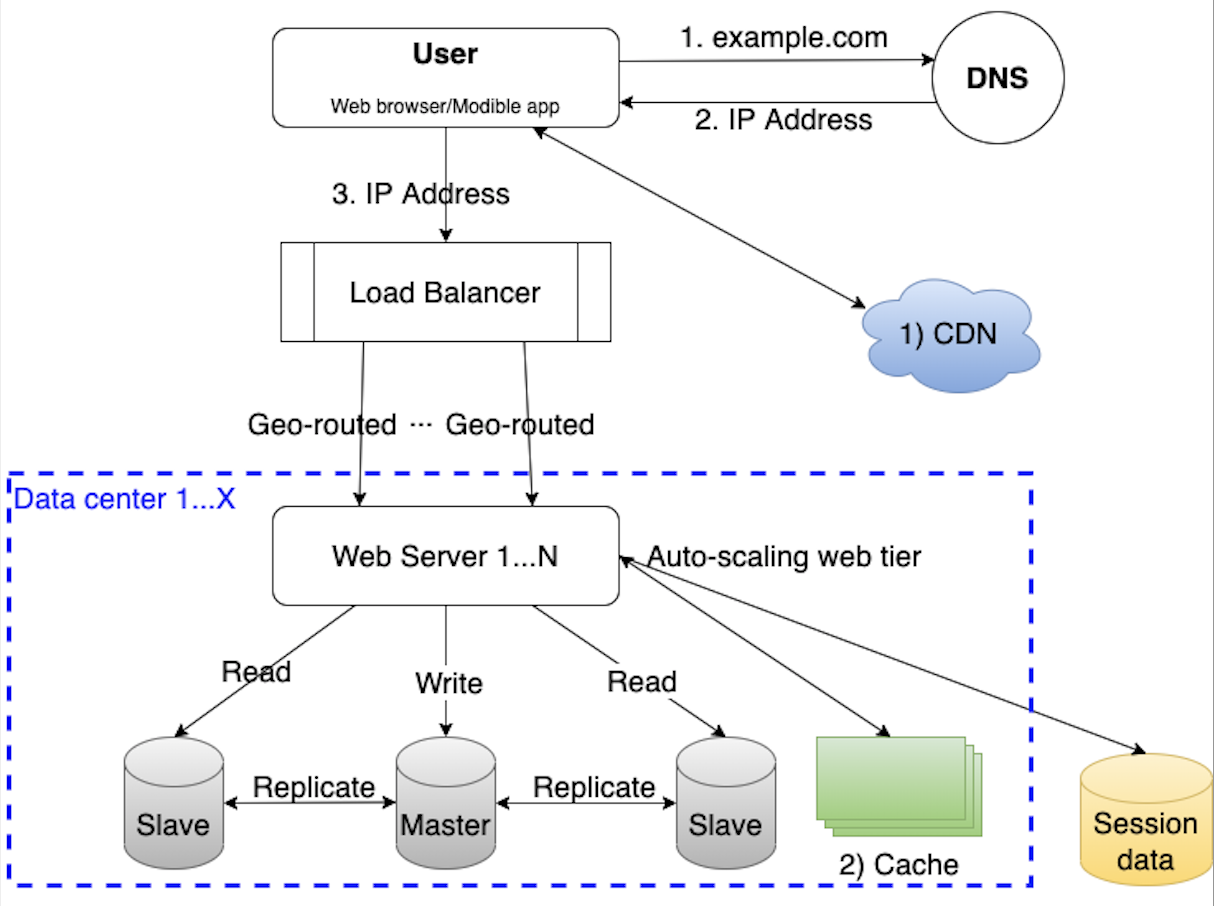 To further scale the system, we can decouple the system components so that they can be scaled independently.

As the system scale for a very large business, it's necessary to invest in the logging, monitoring and automation. These tools can help troubleshoot issues, understand system insight and system health, and improve productivity.

Vertical scaling and horizontal scaling are the two approaches for database scaling.

Vertical scaling, also known as scaling up, is to scale by adding more hardware components(CPU, Memory, Disk, Network) to the existing server. But it has a hardware limit and the cost can be high. Also there is risk of single point of failures.

Horizontal scaling, also known as sharding, is a practice of adding more database servers. Sharding separates large databases to smaller ones which are called shards. A hash function(e.g. user_id % n) can be used to determine which shard should be accessed. In this example of hash function, the user_id is the sharding key which is an important factor to consider when to implement a sharding strategy. The goal is to choose a key which can evenly distribute the data across shards.

With database sharding, it may introduce complexities and new challenges to the system.

Scaling a system is an iterative process. As the user requests increase and system scales, more fine-tuning and new strategies are needed. In summary, we can scale the system to support millions of users by addressing the following areas.